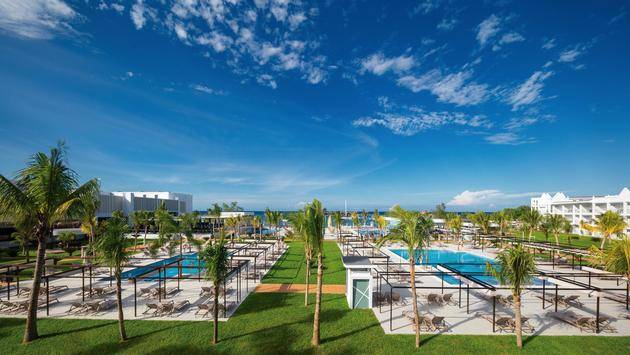 RIU Hotels & Resorts has announced the reopening of Riu Montego Bay in Jamaica, following a complete renovation of its facilities and a change of concept in its service, as it is now adults only. What’s more, thanks to this renovation, RIU’s six hotels in the country are now newly built or recently renovated. Following its reopening, Riu Montego Bay is joining Riu Reggae and Riu Palace Jamaica in the category of hotels only for adults over the age of 18, which means Montego Bay is an exclusively adult destination for RIU.

As well as the complete renovation of its facilities and the change of service concept, one of the big changes in Riu Montego Bay’s renovation is the construction of the Splash Water World. It is the second water park that RIU Hotels has opened in the country, after the one at Riu Ocho Rios, but this is the first one that the chain is offering exclusively to Adults Only hotels, as it will only be open to the guests of the three hotels in the destination.

The customers who stay in its 826 fully refurbished rooms can enjoy RIU’s famous 24-hour all-inclusive service, not to mention having access to a total of five pools during their holidays, all designed to offer guests different environments. As always, the entertainment team is continuing to offer the best day and nighttime activities, such as the evening shows held at the saloon bar ‘Exodus’.

Another important change that the overhaul has brought to the destination is the Riu Get Together Parties. These themed parties by RIU, with live music and shows, are coming to Jamaica for the first time and will be held in the Riu Montego Bay theatre square for the enjoyment of guests at the three hotels in the destination, as soon as COVID-19 restrictions allow it.

The renovation has given the hotel a totally new image, which is largely down to the use of the destination’s typical materials, such as wood, stone and rope, and the selection of colors that are also characteristic of the place, such as terracotta and bronze. All these details can be appreciated in the communal areas, as well as in the existing restaurants which have also been renovated, as well as in the new ones.

In the new restaurants, the ‘Kulinarium’ and the ‘Steakhouse’, these details are complemented by other touches that are characteristic of their style. The former has a more sophisticated décor which includes plants and a chic aesthetic, in line with the gourmet dishes that the restaurant offers. Meanwhile, the Steakhouse has materials and colors linked to the meats offered on its menu, showcasing the use of wood and weathered steel, together with the iconic red of the fire.

The main buffet also displays great changes in its décor and layout. It now uses natural parchment and earthy colors as well as olive green to create a fresh atmosphere added to the fundamental change of the terrace. In addition, the four large skylight windows mean it now enjoys a lot of natural light.

In terms of bars, as well as including a new jerk-style meat counter on the beach, the ‘Sports Bar’ will continue to offer food and drink 24 hours a day, with a new, sportier and updated aesthetic as a result of the renovation.

With the opening of Riu Montego Bay and Riu Palace Jamaica, which reopened a few days earlier also in Montego Bay, RIU is close to completing the return to operation of all six of its hotels in Jamaica, with only Riu Negril still to reopen. The first to reopen its doors, after all the hotels closed because of COVID, was Riu Ocho Rios, followed by the return of one hotel per destination (Riu Reggae in Montego Bay and Riu Palace Tropical Bay in Negril), all following the protocols set out in the RIU Hotels Post-COVID Manual.